Leaving from Singapore, I heard that I could take the bus to Penang at anytime from Johta Baru. As it turned out, that was false so Priscilla has to re-route again. I ended up going from JB to Kuala Lumpur and planning to take the bus to Penang. It turns out I was at the wrong bus station and had to venture over to the other station on the other side of town.
Luckily, I met an adorable friend on the bus.  He is studying at a University in KL and he expresses his desire to travel, but also expresses his fear. He says, “You are my hero.” I smile and say, “Why is that?” He tells me he admires my independence and courage to travel alone.  Only being 22, he is like a child to me and I wish I could have him as my brother.  He shares his Cadbury crisps with me and insists that I have them.  And a sugar addict usually does not turn down chocolate so I graciously accept them.


After my mishap, he says his parents can drive me to the other station.  He says I have to act like I met him before so we fabricate a story, which I do not like doing,  but it is for his benefit.  Both his parents are Muslim and just lovely people.  His father recommends places for me to go in Malaysia and his mother gives me a soy milk and some cookies-so cute.  They drop me off and walk me inside the station and make sure I get a ticket to Penang.  What a wonderful family and boy.  While I may drop the ball at times, the ball ends up floating itself into a positive direction. 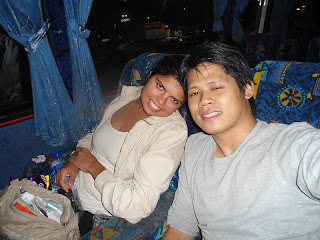 Posted by Live, Love, Laugh with Priscilla at 12:55 AM