Most would never dream of spending Christmas with a stranger/couch surfer.  I knew from his emails and profile that he would be great to hang out and get to know, but really he made the whole thing awesome.  We woke up and shared some amazing tea from Cameron Highland (tea farms).  We sat and watched my favorite international news station and enjoyed our tea(simple moment with Robert that I enjoyed).

We went to his friend’s house for an African Christmas lunch.  His friend’s girlfriend was Russian and we really hit it off as we kept taking photos and talking about Russia.  The food had quite a distinctive flavor that tastes like Bacon.  I realized it was fish mixed with another “mysery meat.” When I asked Robert what it was, he just kept saying, “meat.” I poked the texture with a fork and I just could not eat it.  I ate the fish, rice, and beans, but I could not stomach eating that piece of flesh.  It was Christmas day and I did not want to be disrespectful so I sneaked it inside the napkin and disposed of it.  No one noticed and no one was disrespected so both parties were happy.  We were the Mr. black santa and Mrs, brown claus


We left and plan to go our separate ways for the evening.  Robert had plans for a drinking party with his futbol friends and I had plans to attend a dinner party with a fellow couch surfer.


Robert dropped me off on Jonker Walk, which was quite the happening place.  The food was incredible with a wonderland of Malaysian specialties.  I ate another amazing buffet style fish meal (Yes I pretty much ate two lunches back to back). I had some popiah, fresh lime/lychee juice, and chocolate covered grapes.  The people were so sweet wishing me a “Merry Christmas Sister.”


With all the crowds, I had to make it over the Makhota Hotel, which is where the one couchsurfer lives. I arrive and there sits a few couch surfers and in comes Santa and Ms. Claus.  We take a picture with these two and I meet a special girl named Kristie aka Carrie.  She reminds me of my friend Carrie from Chicago and guess what she is from Chicago like me!


We immediately hit it off and talk about our traveling and cs experiences.  She has been living in Costa Rica for the past five years and has traveled to 40 countries-she has me way beat.


The host of the party, Tali, is super sweet and lovely.  She is originally from France and is a corporate lady.  The other two guys are from Conneticut.  They travel all over, but seem to be completely clueless.  Kristie and I come up with different names for them like Tweedle Dee and Tweedle Dum, Dumb and Dumber, and the Wedding crashers.  The way they act is so funny we can not help it.  Leave it to Priscilla to have to make fun even on Christmas day-mean girl!


The boys carry five or six dominoes pizza boxes with Kristie’s inflatable Christmas tree on top.  It is quite entertaining and I know we have a humorous Christmas night ahead of us. 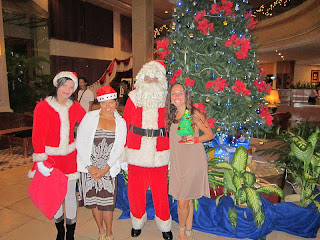 After waiting for cser’s and picking up people, we finally hit the road to the party.  It turns out to be a corporate friend of Tali’s who is throwing the party and I guess she agree to twenty couch surfers attending her party-what a lady 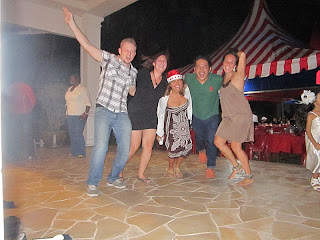 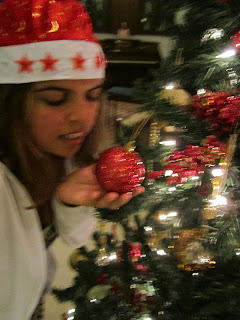 All twenty of us walk up to this beautiful home in a well to do neighborhood of Melaka. The host is absolutely adorable and greets us in such a friendly way telling us to help ourselves to anything.  She has a pilate toned body with frizzy hair wearing a white tank top and white pants.  In her backyard, there are tables and huge trays of food and many people dancing on the porch.  The house is decorated beautifully inside and it really feels like Christmas.  Kristie and I eat some food and share some honey wine.  We eat the most amazing white and chocolate cake. Priscilla-the sugar addict loved the deserrt selection. 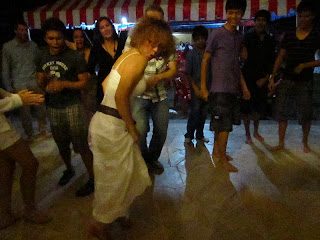 We created our own little dance crew between myself, Kristie (amazing dancer), Tali, Aysak, and the Polish guy.  We lit up the party dancing and singing with one another with such spirit and here it comes…BEING AND FEELING ALIVE! 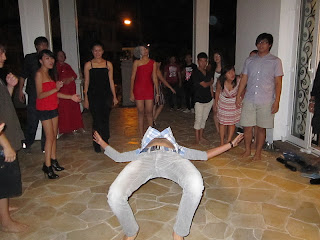 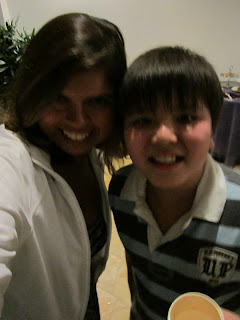 Little Chunk of Love
My favorite moment was singing, “I want to dance with somebody who loves me all together.” The family was a bit stiff at first, but we spread some great energy to get everyone up and dancing.  The kids were doing silly moves and one guy played my favorite song “Saxobeat” on the trumpet.  The people were lovely to talk and socialize with and Kristie and I danced like there was no tomorrow.


I could not believe how blessed I was to have such a wonderful Christmas eve and day really.  Noone understands how much those moments meant to me-priceless.  If it was not for couchsurfing I would not have met such amazing human beings.


Oh did I mention what Tali is doing?? She grew up rich and she wants to give back so she is giving all her money to charity and starting from scratch.  She will have nothing to her name and will live her life based off donations.  Could you do something like this?


I have thought about going around and giving spontaneous donations to organizations and doing missionary work, but breaking free of materialism 100 percent is a real commitment.  I give high praise and regards to Tali for engaging in such a drastic lifestyle and behavior change.  It is empowering to see people with INSIGHT into their behavior and making attempts to change for the better. Go Tali!
Posted by Live, Love, Laugh with Priscilla at 4:31 AM