Christmas mass is always very important to me.  This is not due to the fact that it is Christmas and Christians “should” go to church. It is because of my close relationship to my higher power and during Christmas he is usually the most important thing that I have in my life.  I have to show respect to him and go to church as I can not fathom a life without him.  Ok the bus,
The Christmas eve mass was full of unfriendly locals who did not want to move over for a single female by herself? That annoyed me, but the mass was wonderful.  We sang every single one of my favorite Christmas songs and I made sure to keep singing and singing to praise my lord and savior.
Robert, my host, was heading to meet me at the Portuguese settlement after his hair cut. We both were in different places looking for each other and without an umbrella I was soaking wet from the rain.
He introduced me to his wonderful family friends.  Their home was right in the middle of the action.  What action you may ask? Vendors selling all kinds of Christmas hats, lights, snow spray, and food.  A man on an intercom was doing a Christmas countdown, which was cute.  He also would announce, “There is absolutely no snow spray allowed.” This statement was completely ignored throughout the night.
At first it was mellow and I was thinking, “Is this it?” Things changed very quickly after this thought of mine.  Many teenagers and families started piling in and things began to get very noisy.  The snow spray came out and everyone was getting sprayed as they walked past the main Christmas tree and our friend’s home.  It was madness to watch and when the clock struck 12 midnight everyone shouted “Merry Christmas” and hugged one another Merry Christmas. The fireworks went off right in front of us.  I can not remember a time where I saw such great fireworks so near to me.  Robert’s family was amazing-they were so sweet and I loved getting to know the girls.  We ate some traditional soup and drank some orange punch. 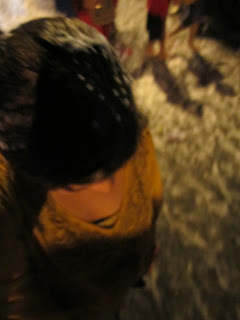 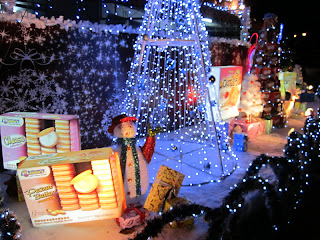 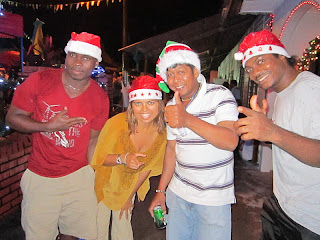 Being a masochist, I decided to go join in the madness outside the gate with my nice friend.  I quickly got attacked with snow spray by a big group of Indians.  I asked for their can to do some spraying and sprayed my hair white.  I ran by the tree to witness a huge snow spray fight among a large group-families and kids all full of smiles and such joy at that moment. 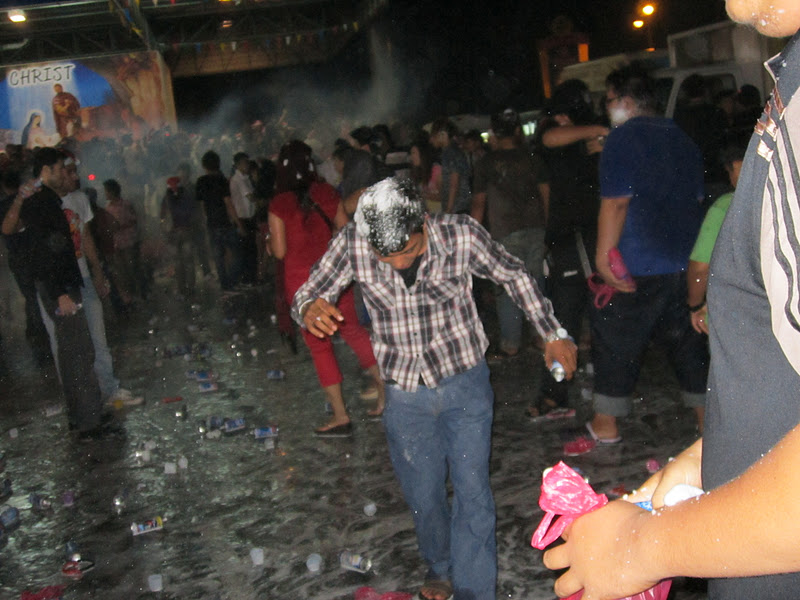 Along the river, there are many seafood vendors and all sorts of food. I grab a string of chili pepper potatoes and head back to the house.


We decide to go back inside the gate and watch the madness.  I talk to the hat vendor who invites me to a nearby party after this party and I talk to the vendor who sells the amazing shrimp chips.  I keep asking the one family friend what kinds of chips they are and he says pork.  We just keep laughing as he keeps saying pork and I keep saying shrimp, but he does not believe me.
It was so lovely because not at one moment did I feel out of place or weird being there. The family was so welcoming and thanks to Robert for this.  We left the house after 1am and stopped by the lighted houses taking photos.  Robert kept taking these silly Christmas photos.  He really loves Christmas-I think more than I do. With our matching lit up Christmas hats, we get into the car and he immediately puts in a Christmas CD of music.  We all sing Jingle bells driving down the road making jokes. We laugh at Robert for speaking Pigeon English, which is hilarious when he mumbles a bunch of words and it sounds like non-sense.  It really was a perfect Christmas eve and Christmas day gets even better….

Posted by Live, Love, Laugh with Priscilla at 3:48 AM