This hike through the National Park was a real hike with ropes, bridges, and jumps from trees. I was so impressed with how everything was clearly marked with many signs and cute little reminders on how far you have gone.  I was hiking through like a warrior-constantly jumping and using the rope to swing through the trees-it was so much fun.  I was talking to others along the way and trying to race these group of Chinese tourists and I ended up beating them ha! I made it to Monkey Island, which is secluded with swings tied to the trees, fresh coconut, and very few people there.  I went for a swim and then decided to keep hiking with my final destination being the light house. 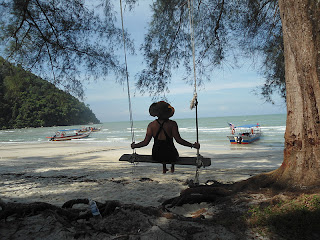 The rest of the hike was completely up hill-lunging from step to the next. At this point, I actually got tired, which I was surprised by ha! Most people stop at monkey island, but I always have to go for the challenge and make it to the end. I found the light house and ran up the stairs in excitement wondering what I would see at the top.  When I first peeped my head out of the hole, I was amazed with the beauty. I felt like I was on the top of the world, which is my favorite feeling as I love heights.  I decided I should try and take a picture of the view by placing it on the bar with my head near the view.
As I placed it on the top, it stayed there for about 3 seconds and then it fell down over the edge.  I watched it fly through the air into the gutter with my memory card and battery popping out.  I had the camera for almost 2 months so I was not surprised by this happening at all.  A nice boy helped me get it out of the gutter and as we turned it on- I was getting nothing on the screen.  It did not survive the fall and I did not care because I did not even like the camera so I was prepared to go back to my love-a Canon.  Having such horrible luck with cameras, I have mentally prepared myself for things to happen.
View from the top before the Fall 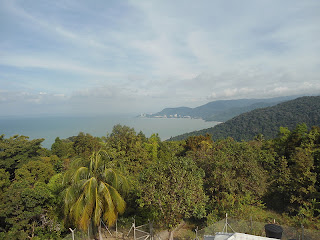 After this camera mishap, I was not about to let this ruin my day. i left the island by boat(because I would not make it back by sunset).  The boat was so rocky that I felt like I was partially swimming in the water.  The Muslim lady was so sweet and shared her sunflower seeds with me.  I usually do not like sunflower seeds, but these had an amazing natural flavor.
I left the boat and continued on to talk to locals in Taluk Balang and eat some local street food.  Again, amazing fresh fish and vegetarian dishes for a dollar- I love bargains, especially when it comes to food.  The local man and his wife were so sweet and he was sharing all the locations he had traveled to with me.


It is always interesting when people try to impress me because I am “American” I will discuss this theory later.


After my yummy dinner, I walked down to the Hard Rock hotel to do some swimming.  Sipping on a virgin mojito in the pool while watching some kids movie-oh so relaxing. I then decided to do some night swimming. The Indian Ocean is sooo warm- it felt so refreshing!


Leaving the Hard Rock hotel, I began to enter the touristy area of Battu Ferringhi where I stopped at Yahong Art Gallery.  It was one of my favorite galleries as it was full of such meaningful pieces and incredible paintings.  The family sat in the back of the gallery having dinner-very nice.


I continued on and stopped by the Golden Seafood Village where they have live seafood and you pick it from the tank and they cook it on the spot-huge Australian crab, Canadian geoduck, lion snapper, france turbo, spider crab, goby, and all kinds of fish. I sat and enjoyed a carrot juice while watching the Thai dance show.


After this I stopped by another food market to look at what they were making.  A young guy waived at me to come to his table and I went to sit down with him- a friendly Indian fellow who works in Kuala Lumpur as a bartender at a nice hotel.  We sit and chat and then he takes me to the bus stop as I have to head back to my host’s house.  We are taking some silly pictures together and I tell him I will give him a call in KL-excited to make another nice, new friend in KL.  He is super friendly with an adorable smile. I just love meeting new friends, especially my kind- Indians=)
Posted by Live, Love, Laugh with Priscilla at 1:32 AM