The great thing about staying in guesthouses or hostels, you meet many different people all the time.  The girl I met, Manuel, was from France and has been traveling for the past couple years.  She basically does what a lot of travel addicts do, which is go work for a bit, save up some money, and go travel.  They follow this routine for years and it works for them.  We wanted to do the same things without taking an expensive, touristy tour so we went by the best way-motor bike.

After some difficulty getting a good price on an automatic bike, we had to do manuel, which meant that I had to learn how to drive a manuel bike.  Manuel had experience driving manuel(ha) bikes so she did not mind doing the driving.

Off we went driving to the Pekou Caves, which are 40 plus kilometers away.  Again, the drive was gorgeous. Locals on bikes stopped and asked us where we are from and we exchanged smiles and laughs.  We passed through the villages and stopped at the Whiskey Village where they make Lao Lao( a rice based whiskey), which is popular and so is the Beer Lao.  I saw an Owl tied up to a bench(random, but beautiful.) We got to the caves and there were many tourists buzz kill!  Inside were thousands of Buddhist statues that had been there for thousands of years.  It was pretty going up to upper part of the cave because less people were up there.  Inside the cave, it was so peaceful, dark like midnight, and not a sound inside.  I initiated and lead a meditation session for us and it was quite nice.  The drive and boat ride was very beautiful and I appreciated it.  I wanted to have some more serious caves, which are all over Laos so many more to see. 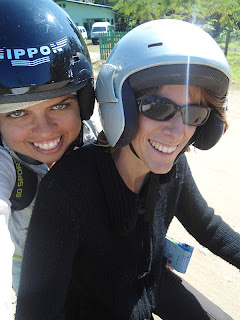 We drove back to the Southern side of town passing many kids on the street shouting Sawadee and smiling and soaking up the sun.  Did I mention already how much I love the motor bike?  It was bit bumpy and rocky getting there and we were getting antsy as we wanted to see the elephants.  I made up my song from Pink Martini, “Donde estas, donde estas elephantes, que paso que paso elephantes, te busque te busque elephantes.” With each turn on the road, I wanted to see them around the corner.  A few miles and still no elephants.

We arrive at Elephant Village where they have the elephants hidden.  It is a beautiful place with pristine views horses, monkeys, and bird on the premises, but still no elephants.   We sit and take in the view while eating some bananas-feeling like a monkey eating all those bananas all the time.  We get directions to the Tae  Sak waterfall to go to a different more affordable elephant camp.  It is about 4pm and we rush over there with concern that we may not see any elephants if we do not hurry up.  We hop on the boat and  arrive to the other side with the waterfall and two beautiful elephants awaiting us. It was perfect as no tourists were there just the mamouts.  We make a deal for $120,000 kip  per elephant for an hour.  We were shooting for $100,000, but  his final was $120,000.  We did not even care at that point as we wanted to enjoy the elephants.

We each had our own elephant and mine was 48 years old and her name was Pong.  Manuel had the younger elephant who was 27 I believe.  The instructor was explaining  stop “Hei” and go “Pie.”  His facial expressions were so happy as he was sitting and talking about the elephants.  As my elephant came first, I realized it did not have any straps or harness to hold onto and I was a bit scared.  The one elephant I ever went on was at the Orange County fair in California.  I went on for about five minutes and rode around in a circle, which my boyfriend was taking pictures.

I hopped on with my mamout behind me who was very friendly and pulled me into place throughout our ride through the trees.  When I first hopped on Pong, I was exstatiic.  My friend Manuel kept saying, “You look so happy.” I was exstatic to finally be riding an elephant in my destination of Southeast asia.  Pong was quite the beautiful elephant and my favorite part was her ears and her trunk.  As we were riding through, my legs were touching the backs of her ears.  She kept stopping to eat and Mr.Mamout would tell her “Pie,” but most of the time she kept eating.  The mamouts were pretty nice to the elephants.  They did not have any sort of whip or harmful tool to get them to move.  And they kept petting the elephants.

We were on for about 40 minutes while the sun was starting to set.  It was time for a bath for my elephant and of course I requested joining in on this activity.  Manuel was suppose to go on the same elephant with me, but she decided to stay back and watch.  So it was just me taking Pong down into the water.  It is crazy how steep the hills was and while you feel like you are going to fall, but you are on a 10,000 pound mammal
Before........ 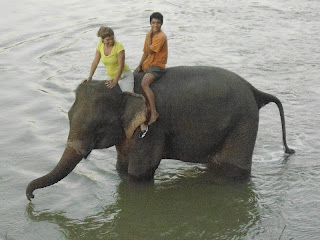 The mamout hopped on the back at the bottom and off we went into the water slowly.  The elephant raises her trunk lifting me up into the air. With my body just above water and Pong fully into the water, the instructor shouts, “Keep holding the ears.” Pong begins to twist her trunk and I get pulled into the water.  I manage to hold onto her ears for about 20 seconds until I get thrown off and am pulled by the stream away from my dear pong.  I get back onto land and then jump back into the water to hop back on.  The mamout is pulling me up and I finally manage to get back up and hold on tight to the ears.
After.....

She does some minor twists and turns, but I keep balanced and stay on.  We take her back up the hill while the instructor is shooting all kinds of pictures with my camera.  I am so thankfull for him taking pictures and being so nice.  I actually feel bad for making a deal with him, but it was the price we heard from the locals and other people.

Getting out I am completely soaked and it is mid sunset, which means time to get back on the motor bike because riding in the dark in Laos is not so fun.  I hop on the bike wearing wet pants and jacket with nothing underneath-I am basically asking to get sick, but who cares it was totally worth it.

Noone said it would be easy, but it is always worth it
Posted by Live, Love, Laugh with Priscilla at 10:35 PM