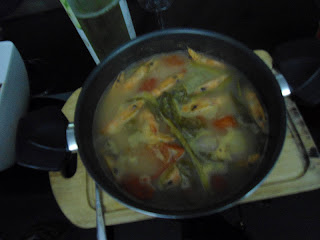 My host decided to have an international pot luck, which I thought was a great idea.  We expected more people, but it ended up being myself, Martin (from Philipines), Molly, Roberto(from Panama, but in love with China=), and Sylvia from Portugal.  Therefore, we had a Philipino dish, Chinese dish, Thai dish, Portuguese dish, and my American dish of muffins.  The food was amazing and the winner of the Iron Chef competition was Martin with his soup!

My muffin attempt failed as we were trying to figure out how to work the oven.  Someone said, “How about you try lighting the bottom?” Because for the stove, you have to manually light it.  Instead of me dealing with a flame and an oven(bad combination for me) I asked Martin to do it.  A few seconds later I leave the kitchen and hear “BOOM!.” Thankfully Martin survived this mild explosion, but he lost some arm hair! We decided to not go near the oven after that and resorted to eating batter for dessert along with purple containing rum and fresh ginger made my Molly.


Throughout this time, we had so many laughs and jokes that I can not write about all of them.  Molly is one of those girls who loves animals and pets and likes to scare girls like me who do not like germs, bugs, and again GERMS.  She decided to tell me about a level 10 orange mold in a pot left my a roommate and then made me smell some old broccoli green, but not “deathly” like the orange one! I was running around the house so grossed out by the mildew talk and took my sponge away from her because I wanted to keep it clean(sacred). It was pretty hilarious!


And basically I had a running joke that I would marry Roberto when he turned 30 and I would then be 38.  Roberto (include picture below) is only 19, but speaks six languages, travels all over, loves hiking, cooking, eating, entrepreneur mind and has some crazy energy like me! Therefore, not dating young boys, I told him we could get married when he turns 30! 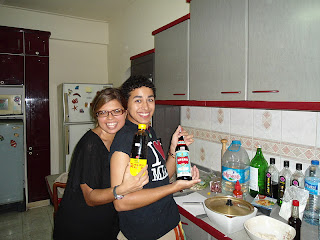 Here is the letter I wrote to Roberto in my journal, which happened to be out loud in front of everyone as they were laughing hysterically.


I love Roberto,  I would marry him at 32 or 35(It seems I increased the age).  He is smart and speaks six languages.  Why can’t I find a man at 35 with his drive and brains and sex appeal(added by Molly haha).  I really want to see him in a neon blue speedo and I will make sure to wear extra, extra, extra lavender for him and we can take salsa lessons and dance the night away until sunrise(Roberto hates lavender and salsa lol).  I want him to take me to “Ping pong” in the Bangkok night clubs in with extra poles.  But perhaps,  I need to start dating German guys because I heard they are deep thinkers who like philosophy.  Roberto likes breaking the law and hiding in car trunks –my kind of guy and he has big ideas to open an airline, which scores big points in my book.  We could name the airlines Rajacilla or Rajaberta, but people may not want to fly our airlines because they can not pronounce it.  We could serve roti and tortillas as snacks and entertain with karaoke.  Roberto is not accepting of my religion, Priscillafarism and my followers of Priscillalites-this is a population of 1 million. Roberto likes Korean techno while I like vocal electronic beats.  Roberto says he loves Miami, but truth is he likes to lift weights in a baby blue speedo and play with dolphins.  The good thing about our relationship is we both like hiking and yoga pictures on mountain tops “from the back.” Bad ump chu!


Obviously the Priscilalites will understand this letter much better!!!

MORE PICTURES AND VIDEOS COMING-CURRENTLY FIGURING OUT A TIME SAVING METHOD
Posted by Live, Love, Laugh with Priscilla at 6:22 PM