Such a beautiful start to Chiang Mai-Northern Thailand literally-opened up my eyes off the bus to see a dark blue midnight sky and a huge moon and stars staring at me.  For moments, I was still asleep, but I kept looking up into the darkness and smiling.  When I awoke again, it was to the sunrise and little villages, farms, and street vendors smiling.  What is amazing about Thai people is that they will shine their smile through a window, an alley way, a slight crack in a door-where there is a way-there comes a smile.

Out of the big city and into nature and countryside-perfect! I met a couple from San Francisco(clueless number 1 and number 2), but they were nice just typical tourists.  That was the extent to my American tourist interaction especially when he ran off the bus.  I asked, “What happened?”  She said, “He has to call his mom-she does not like us traveling to foreign countries.” Ha! The moral to this for Priscilla is that not everyone is as independent and resourceful as me and some people do grow up with a real, close knit family.  We all grow up differently and that is okay=)


7am and walked around the bus station a bit before being approached by a red truck also known as a taxi.  It was suppose to be cheaper, but not to my village/mountain destination, but no complaints at all as I am very happy staying outside of tourist central.  After he was being so helpful and sweet, I hopped in and we started our drive to my host’s house.  Two strangers just sitting and smiling at one another taking funny pictures of each other as we traveled into the hills and villages past Chiang Mai.


What is funny is that my host does not even have an address.  Can you believe it? No street name and no address=no mail! I have been requesting to not get mail for years now, but it difficult to do in the US.    The cab driver is having difficulty finding the place and finally we arrive to the cutest little home ever. 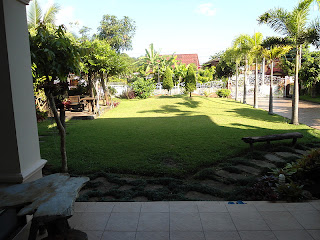 My host is Tink, a chemistry teacher at the nearby university.  I meet Roberto from Chile and we sit drink coffee and eat homemade cherry cheesecake-for breakfast.  Anyone who serves Priscilla dessert in the morning gets a thumbs up in my book!


Roberto and I plan to meet in front of the municipal building for the big balloon festival.   My host gives me a ride down to central city.  In his car, he has Britney Spears-Hit me baby one more time playing on video-double thumbs up-such a Thai thing! We talk about going to do karaoke together-think that is a must!


I head off to rent a mountain bike and have no luck.  Many do not speak English so we just exchange smiles and I go on my way.  Temples, guest houses, markets, and restaurants surrounded by beautiful, green hills.  I decided it reminds me a bit of Monte verde in Costa Rica-one of my favorite cities.  The air is nowhere near as clean as Monte verde, but still cute and charming.  The fresh fruit is amazing-love the dragon fruit, passion fruit, strawberries, and oranges straight off the tree.


As I continue to walk to the river, I see balloons going into the air and hear fireworks.  The hot air balloon part of the festival. 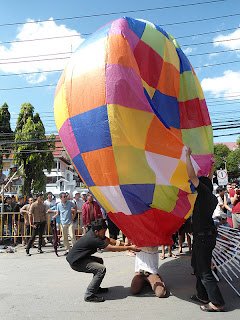 This is part of the Loi Krathong Festival


It takes place on the evening of the full moon of the 12th month in the Thai lunar calendar.  Loi means “to float” while krathong refers to lotus shapes receptacle that can float on water.  The festival takes place over 3 days Wednesday, Thursday, and Friday.  The day I went was Thursday and Friday with a parade, singers/dancers, amazing food, markets, performers, fireworks, and the magic of the sky lanterns.  The lanna sky lanterns (khom loi) are all launched in the air at the same time lighting up the sky and the city.  It is quite magical.


During my time with the balloons, I met a lovely teacher whose students were creating the flower displays for the parade.  She was so lovely as she was asking how to say specific words in English.  After our chat, I was talking with a monk and continued to smile and engage with little kids.


A couple hours later I found Roberto and met his friend, Barbara, who was also from Chile.  We are enjoying the festival and along comes this little boy from earlier.  It turns out he follows me around the festival-it was quite adorable.


The thai community are all together at this event: families, teachers, religious leaders, and spokes persons covering the event.  The “unity” is present here as well as people are joined together creating the displays on street corners, decorating temples/homes/gardens, and such love and passion toward their cultural event.   Here are some pictures of the unity: 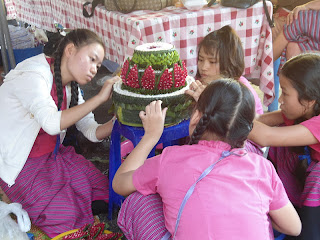 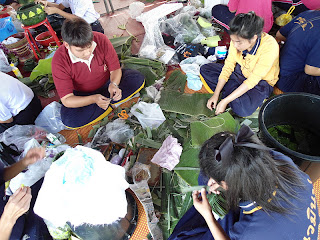 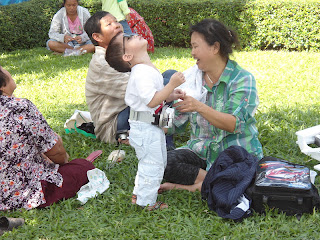 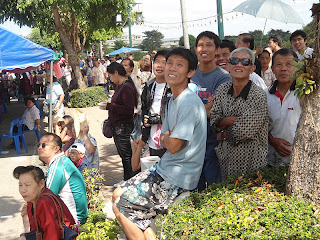 After the event ends, we find a bike for me to rent and I am as content as ever riding around town on a beautiful day.  Roberto and Barbara go to eat lunch and I am so happy on my bike-I just want to ride around and explore.  I end up eating at a little, family owned Thai spot to have some Ko-Soy, which is an Northern Thailand specialty-delicious! Sunsets are one of my favorite things so I receive some advice to go to Natharu bridge to watch the sunset.  With my sense of direction, I decide to go off and follow the sun.  I stop and ask a local about where to find the bridge.  We pull out the map and he says, “We here, you here-very far, very, very far.” While he pats me on the back he says, “Maybe no sun for you today.” Oh one of the many interactions that just makes me smile and be okay with my poor sense of direction.


If you don’t get lost, there is a chance you will never be found- Unknown Author


I biked off into the streets  smiling and waiving smiling and waiving.  I met up with my new friends, Roberto, Barbara, and Javier(aka Diego Rivera) ha! Music, dancing, locals taking pictures of me during the parade, ice cream in bread sandwiches, shrimp dumplings, mocha, and fresh sushi.  The best part was riding through cars and bikes of traffic over the bridge.  I was dodging the cars, riding on the opposite side of the road waiving and smiling.  The locals were laughing at me and it was quite a fast and the furious experience.   I was also singing “Firework” by Katy Perry.  This is definitely a moment I wish I could have recorded, but it was better for me to be focused on the road. I think most people who know me would agree! Ha!


We were lighting off many of the sky lanterns and watching them drift off into the sky. We decided to write on them. I wrote Go Brazil 2014 and I love Thailand.  Roberto wrote some Chilean saying and I love Pad Thai ha! 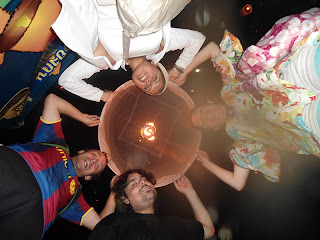 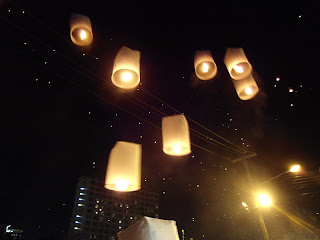 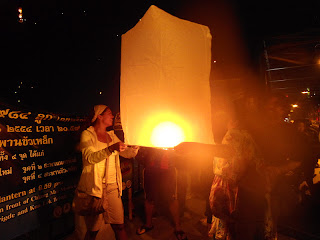 Guest house night cap with Roberto, Barbara, and two French girls drinking Pisco sours (mainly just a whole lot of fresh squeezed limes!) talking about India, France, Morocco, and Thailand culture.  They were all speaking Spanish while I was listening and speaking bits here and there. I always feel self conscious about my Spanish, but necesito mas practicar! Roberto and I road home listening to the fireworks and seeing the people still partying on the streets. 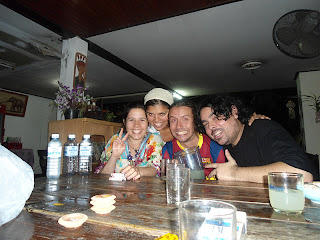 Posted by Live, Love, Laugh with Priscilla at 1:33 AM