Loi Kratong Festival Friday with My Host and his Family

With my dog bite, my host basically acts like a guy and says, “It is no big deal.” I do not have any pain and no bleeding from the bite and I feel okay so I kind of agree with him and decide to hold off until tomorrow to go to the hospital to get my shot.  I read that the sooner the better, but less than 24 hours is okay.  I was trying to not be typical Priscilla being paranoid about getting something or like American people who worry about every little thing, but it is hard because I grew up in super spoiled America!

Mink’s family consist of his sister, her husband, his niece and her husband.  They are adorable and speak very little English.  We watched the festival together and then stopped at a restaurant right on the river to watch the sky lanterns float up and away. It was quite magical and as Roberto said, “Romantic”, but no one to share that moment with boo!
The Incredible Parade 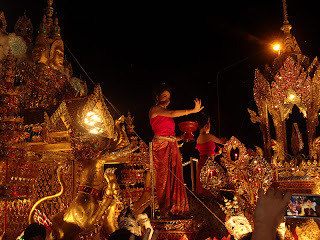 I pick up some Thai words in the car and then randomly say them in a serious way “ Chai, Chai.” We joke about the subway stations in Bangkok, “Nana” and “Saladeng” station.  In the Thai language if you mis pronounce a syllable it changes the whole meaning of the word or they do not understand the word at all.  I picked up on this and tried to put emphasis on specific syllables like them, but it did not always work.  For instance, I would ask “How do I get to Saladeeng station? “ They would look at me like a I was speaking a foreign language and then I would try again, “Saladeeeng.” Eventually they would say, “Oh you mean Saladennnnggg.” This one kept happening and I thought it was pretty funny because I really thought I was saying it identical to them, but apparently not! 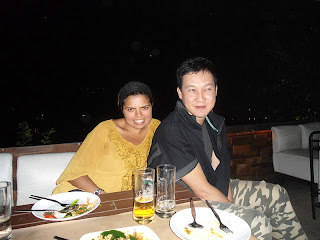 Me and my adorable host at dinner
Posted by Live, Love, Laugh with Priscilla at 2:13 AM