Laos to Vietnam to Laos...?

When heading to the bus station, I thought there would be someone there who know about how I could get the visa for Vietnam.  When researching it in New York, it cost $125 through the embassy and around $40 if you get it in Southeast Asia.  I heard through the grapevine that you could get the visa at specific borders and thought, ‘Okay I will just get it at the border.”

When choosing a bus, you have 10 buses and 10 people coming up to you.  I knew my price and destination and was going to stand firm.  I ended up getting the price that I wanted $70,000 under the asking price.  The bus driver was quite friendly, but when I asked him about the visa he just kept laughing.  This is an annoying thing(When you ask a serious question and you just get laughed and joked with).  I  then proceeded to go around the whole bus station asking every single staff about the visa to Vietnam and not one person knew ! These people drive to Vietnam everyday and no one had any information.  I asked my driver over and over and over again and still no response.
I decided to take a leap of faith and just take the bus and assume I could get the visa at the border.  Myvietamvisa.com is what I planned to do, but the pick up for the visa is only in the airports and travel agencies were charging ridiculous amounts for the visa.
The buses from Vientiane to Hanoi are sleeper buses and quite comfortable.  I was all snuggled up with my sticky rice and vegetables watching some Korean sitcom that I enjoyed.  I had the whole seat to myself and the staff were being very nice bringing me water.   ALL the people on the bus are locals, which makes me very happy.  I walk down the aisles saying, “Saba deee.” People laugh and joke with me and the guys next to me keep looking at me like I am an alien.  I love it.


We had a made a stop to sleep for a few hours and then arrived at the border at 6am to depart Laos.  My driver rushes me in and out of the office and we head to the Vietnam border where a bunch of customs men are standing with guns-they look scary and intimidating.  I ask about getting the visa and he shakes his head and says “no,no.”  I then find a girl who speak English and says, “You go to Vientiane embassy back to Laos.”
I immediately go to my driver and ask him what to do and he says, “Bus back Laos” as he speaks little English.  I am beyond annoyed at this point as I asked him this before and I guess he assumed I had a visa when I was asking about visa.


In the rain and fog, I walk back from the Vietnam border to Laos immigration.  I see an officer and stop and show him my passport.  He shakes my hand and says, “Bye back to Laos.” I cetch the bus number he told me too and back a I go to Laos.
2 guys from Canada sit in the middle aisle on the floor as they also made the same mistake, but actually they go myvietnamvisa, but it does not work at the border.  The only way to get one is to go to the embassy.  Now I think back to spending the $120 and it was definitely worth it, but I did not know the dates.


The bus drivers are nice and they do not charge me and share their jackfruit and oranges with me.  The drive is gorgeous again, but this bus is going in the wrong direction! So excited for Hanoi now I have to reroute myself back to the bus station with the people who know nothing.  I know this sounds bad, but the people at the bus station are 120 percent informative.  Oh well guess I was re-routed for a reason.  This is one of those times when I have to KEEP THE FAITH.


Yes I wasted money and time, but it did not happen for a reason.  Headed back with the two guys from Vancouver and split a cab back to city center to look at flights. It turns out the visa would not happen for three days regardless of arriving from overland or aiport so I decided to go to Pakse, which is close to the 4000 islands and close to Cambodia.  Re-route to Cambodia then possibly Vietnam and then Malaysia.  We will see whatever God decides I have to go with the changes and accept them with patience (which is hard for me at times), grace, and humbleness.  All a work in progress.

Monk listening to 50 cent Take off your pants just a little bit take them off pull them down just a lil bit eating Chips ahoy cookies.  Laughing joyously eating cookies and milk.  Theone monk shows me a picture of his “special friend” and his only English is “Thank you very much” Thank you very much.  It is sooo cute. Oh such a long day and what a way to make a turn around.  MangCity shy, Dune, and Pet. The cutest pet t hat you can not touch.  City shy keeps practicing my name Prisceella, Pris, Pris, Pris  almost like a parrot.  Oh this is life and these precious moments make it worth LIVING!!!!!


Set me free I believe in you and that our love is true oh I believe in us! Listening to some dance music with the monks and a nice Lao local-such a pleasure. 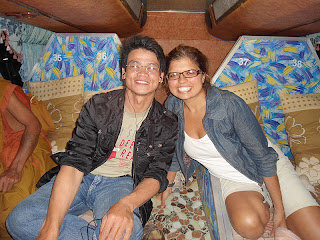 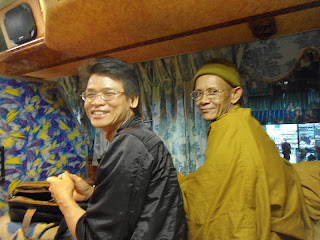 Posted by Live, Love, Laugh with Priscilla at 8:11 AM