On Wednesday night, I met with Deehu, Ang, and the German girl.  I originally arranged meeting with Deehu and Ang and the German girl came along through a connecting with Ang. Ang was born in Laos, but grew up in Australia and has lived in Toronto and is now back in Laos.  He is involved with a project called Design for Change, which started in India.  It involves teaching in a community based way.  It is started by an incredible woman.  He is actually on his way to a conference in India tomorrow, which I would love to have attended.  He volunteers in a Laos school teaching English with kids 12-14 years old.  Right away I was interested in doing some volunteering as they are working on some specific projects i.e. starting a school café and building a tree house.  He said I can go tomorrow and take his place in class.  This was one of those moments when I wish  had some extra time so I could stay and volunteer.

Next person that came to meet us was Deehu.  Deehu grew up in India, but currently work for a corporation in Laos.  He has a big smile, a sweet teddy bear.  He has a passion about being a teacher and getting out of corporate world, but lt seems to currently serve its purpose.  He is my awesome host in Vientiane as well.

The German girl is just traveling through Asia and just finished school not much substance there.  We went for some traditional lao cuisine-sticky rice, Laab, spring rolls, and seafood dishes.  It was quite delicious and a local spot off the tourist radar.  Those local spots recommended by locals are usually the best.
It was nice talking about the religion and politics of India, learning each others backgrounds, and learning about Deehu’s interesting year living in Tanzania.  No electricity, no indoor plumbing, cooking your breakfast/lunch/dinner from scratch literally, waiting for deliveries on stone age schedule, and a lalck of social activities  and things to do.  As Deehu said, “It changes your whole perspective on life.”
Ang and Deehu 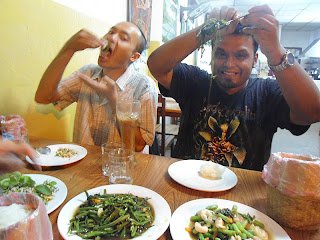 We then met with Deehu’s friends an international  wonderland with a French man, Lao woman, Thai woman,  and the Indian trio.  The Indian from the US, the Indian from India, and the Indian from Singapore.  They were all quite lovely as we sat and “chilled”-what you do in Laos when the sunsets.  We were talking about starting a business in Laos and how much profit can be made off investing little.  A man recently started an Indian restaurant off of a couple million kip. When we calculated that in dollars it ended up being $1000.  The conversions are mind boggling for me.  I thought of starting a hookah bar as they have a couple middle eastern restaurants, but no hookah bar.  Thinking outside the box always a great way to think because working for someone for the rest of my life is not on my agenda=)
Posted by Live, Love, Laugh with Priscilla at 9:18 PM